This is the house where he recorded his music, where he brought people from different races and classes together and where he was almost assassinated.

On Saturday, December 2, 2017, we will be paying tribute to Bob Marley “inna sound system style” on this same property. We salute his courage in performing at the 1976 Smile Jamaica Concert even after being shot two days before.

The admission is $1000 JMD ($10 USD) and part proceeds will be used by the Bob Marley Foundation to fund a music room at the Haile Selassie High School. .

For the first time ever, the Museum will also be conducting night tours. 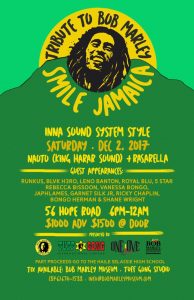